The Grotto, designed by Daus & Otto architects, is a faithful reproduction of that in Lourdes, France, where Our Lady appeared in 1858 as the ImmaculateConception to Saint Bernadette.  The statue of Mary in the grotto is of marble.  A statue of Bernadette at lower left gazing up at Mary recreates the original scene at Lourdes.  On March 25, 1910, ground was broken for the erection of this Chapel of Notre Dame, which was originally a mission chapel attached to what was known as “The French Church” of St. Vincent de Paul on West 23rd Street.  Services were held in this chapel until the completion of the present church, the cornerstone of which was laid on March 25, 1914.  The chapel was dedicated on October 10, 1910 and on December 2, 1916, Bishop Hayes consecrated the altar of the grotto in honor of Our Lady of Lourdes and placed in it a relic of St.Severin.

Below: Enrollment card for subscriptions toward the building of the chapel.  Handwritten date above the names on the right is 1911: 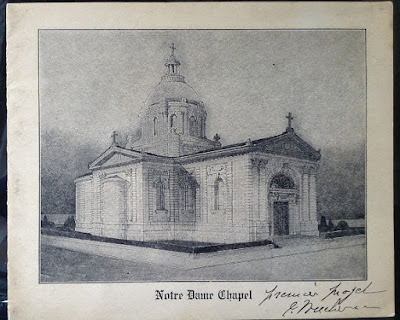 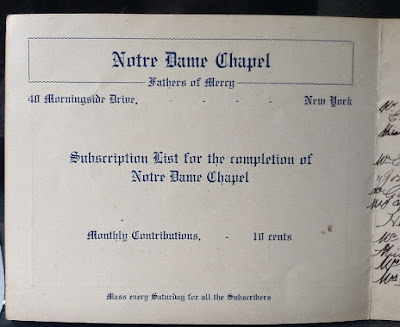 Chapel interior (from a photo on a Church of Notre Dame brochure. Original photo has been lost):

AFFILIATION OF THE CHURCH OF NOTRE DAME WITH LOURDES

Excerpted from Centennial Celebrations – Our Lady of Lourdes – The Grotto Church of Notre Dame, 1958

The Grotto is a faithful reproduction of that in Lourdes, France, where Our Lady appeared to Bernadette in 1858 as the Immaculate Conception.  It was first opened for public devotion on October 7, 1910, and has since become one of America’s central shrines honoring Our Lady.

Through this association with Lourdes, members of the Confraternity are abundantly indulgenced and are capable of receiving Plenary indulgences frequently when visiting this Grotto-Shrine. By special arrangement with the Ecclesiastical authorities in Lourdes, France, the Fathers of Mercy made possible for all devotees of Mary Immaculate to secure the Lourdes Water, which is still shipped here direct from the Mother Shrine in Lourdes, France.

About the Apparitions at Lourdes